This expedition encompasses the wildlife paradise of South Georgia, the remote Falkland Islands, as well as the extraordinary beauty of the Antarctic Peninsula. Experience unprecedented wildlife viewing opportunities. 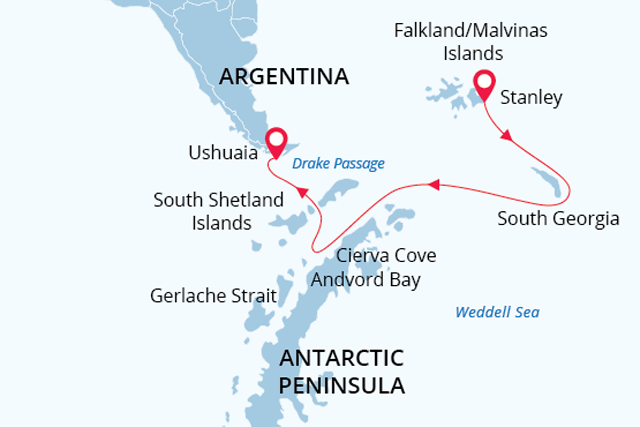 The small city of Ushuaia is the perfect starting point for our expedition cruise to Antarctica, South Georgia and the Falkland/Malvinas Islands. Located near the southern tip of South America, it boasts beautiful views of the Andres Mountains and the Beagle Channel. Stroll the lively main street of cafes, shops and outfitters, perhaps picking up a last-minute item for your voyage, or enjoying a typical Argentine grill entrée at one of the many casual restaurants. If you arrive early, you will want to visit beautiful Tierra del Fuego National Park.

In the afternoon we embark the Sea Spirit and set sail down the scenic Beagle Channel.

Through presentations and informal conversations, our team of experts on Antarctic wildlife, history and geology will enlighten you about what we’ll expect to see in the days ahead. Keep a sharp eye out as we cross the Antarctic Convergence, where ocean dynamics create a unique zone of marine life and activity. In the early evening of the fourth day, weather and sea conditions permitting, we plan to have our first landing in the South Shetland Islands.

Days 5-8: The Antarctic Continent and the South Shetlands

In the region of the South Shetland Islands and Antarctic Peninsula, we get a great variety of opportunities to actively explore the unique wildlife and breathtaking scenery. With nearly 200 recognized sites here we use all our experience to offer you the best places and ways to explore the enchanting world of the Sixth Continent. A flexible planning is a key to a successful expedition.

Our Captain and Expedition Leader will do their best to show you all the faces of Antarctica. We hope to tick off 5 penguin /6 seal / several whale species in Antarctic check-list. While cruising along narrow Antarctic waterways we admire huge icebergs of different shapes, sizes and colours. We visit scientific stations representing several different countries and learn about Antarctic scientific researches straight from the source. Of course, setting foot on the actual Antarctic Continent is also on agenda.

More informative presentations are in store today, as we head northeast toward South Georgia.

For many, South Georgia is a not-to-be-missed destination within the Antarctic region. These sub-Antarctic islands are mountain peaks emerging from the Scotia Arc, an underwater mountain chain that extends from the Andes to the White Continent. Shaped like a long and narrow whalebone, the islands are home to:

Penguins – around half the world's population of macaroni penguins, along with 100,000 pairs of Gentoo penguins and about 6,000 breeding pairs of Chinstrap penguins.

The most attractive residents of South Georgia are King penguins with their orange-yellow crowns. The total number of King penguins is around 400,000 breeding pairs.

We spend three days among the alpine landscapes and penguins colonies. We will also visit the historic settlement of Grytviken. With its whaling-era remnants and Earnest Shackleton’s gravesite, the one-time whaling town is one of the highlights of South Georgia.

The Falkland Islands offer an unforgettable vista of moors and rugged coastlines carved by the South Atlantic, where the wildlife and plant life form a link between Patagonia and Antarctica. On the beaches, elephant seals are a spectacular sight when battling among themselves to establish territories or just simply relaxing. Sea lions and fur seals are also common sights. As many as a million penguins nest in the Falklands every summer, representing five of the world’s seventeen species – King, Gentoo, Rockhopper, Magellanic and Macaroni. What’s more, for the Gentoo, the Falklands are home to the largest population on Earth. Look for black-browed albatrosses nesting on grassy hillsides overlooking the sea.

The capital of the Falklands Port Stanley is the southernmost British outpost in the world. With many reminders of its British heritage such as red phone booths and English pubs, the town boasts other unusual sights like a whalebone arch and shipwrecks along the coast.

Reality begins to set in during this final sea passage separating the magic world we’ve just explored from the rest of the world we’ll soon be rejoining. Refresh your memories through a photo exchange with newfound friends, and bid farewell to seabirds and whales that you can identify more easily now.

The ice-strengthened small all-suite expedition ship Sea Spirit (originally Renaissance V) was built in 1991 in Italy. From that time she has changed several operators and regions of navigation, cruising in Singapore, Alaska, Pacific Basin, Arctic and Antarctica. The vessel was modified in late 2010. Providing spacious suites for accommodation of maximum of 114 passengers (the smallest suite is 20 sq. meters) the Sea Spirit at the same time features maneuverability and friendly atmosphere of small ships. All suites have private facilities and exterior views. Some of the suites feature private balconies for enjoying fantastic landscapes of the Arctic and Antarctica. 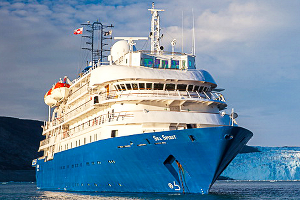