Cruise south of the Antarctic Circle and explore the coast of the Antarctic Peninsula on this 11-night departure. Travel aboard the comfortable Plancius as we encounter several species of penguins, whales, seals, seabirds and more. 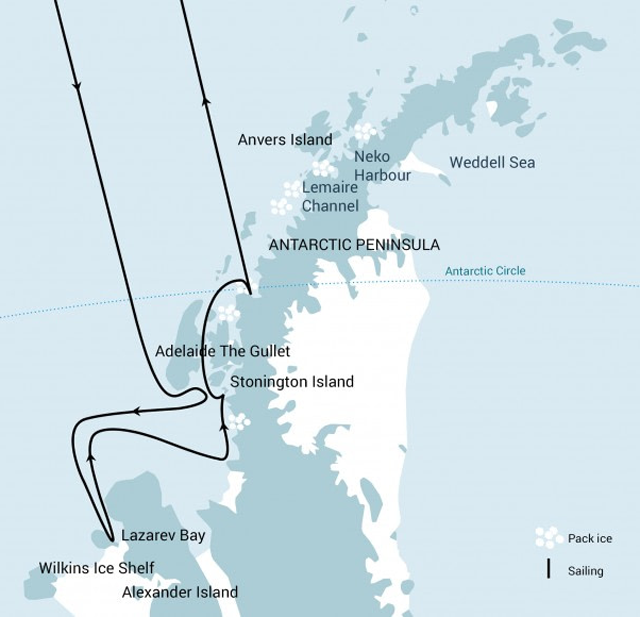 Day 1: In the afternoon we embark our vessel in Ushuaia

In the afternoon, we embark in Ushuaia, Tierra del Fuego, Argentina, the southernmost city in the world located on the Beagle Channel and sail through this scenic waterway for the rest of the evening.

During these two days, we sail across the Drake Passage. When we cross the Antarctic Convergence, we arrive in the circum-Antarctic up welling zone. In this area, we may see Wandering Albatrosses, Grey Headed Albatrosses, Black-browed Albatrosses, Light-mantled Albatrosses, Cape Petrels, Southern Fulmars, Wilson’s Storm Petrels, Blue Petrels and Antarctic Petrels. Near the South Shetland Islands, we spot our first icebergs.

We may start our first day in Antarctica with a landing at Hannah Point, where we will find a nice variety of Gentoo Penguins, Chinstraps and southern Giant Petrels, as well as Elephant Seals hauling out on the beach. At Deception Island is a sub-ducted crater, which opens into the sea creating a natural harbor for the ship. Here we find hot springs, an abandoned whaling station, thousands of Cape Petrels and many Kelp Gulls, Brown and South Polar Skuas and Antarctic Terns. Wilson’s Storm Petrels and Black-bellied Storm Petrels nest in the ruins of the whaling station in Whalers Bay. On our way further South we call at Cuverville Island, a small precipitous island, nestled between the mountains of the Antarctic Peninsula and Rongé Island. It contains a large colony of Gentoo Penguins and breeding pairs of Brown Skuas. In Neko Harbor and Paradise Bay with its myriad icebergs and deep cut fjords, we have the opportunity to set foot on the Antarctic Continent. We aim for a for zodiac cruise between the icebergs in the inner parts of the amazing waterway of Paradise Bay. We sail through the spectacular Lemaire Channel to Petermann Island offering Adélie Penguins and Blue-eyed Shags. We also try to land at Pléneau Island with a fair chance to encounter Humpback and Minke Whales. Overnight we head south along the Argentine Islands to Crystal Sound and cross the Polar Circle in the morning. We aim to make a landing at the abandoned British station on Detaille Island which is likely to be our furthest south. The landscape is very impressive with very high mountains and huge glaciers. We may reach the Fish Islands on the way northwards were we encounter one of the southernmost Adélie Penguin and Blue-eyed Shag colonies in the Antarctic Peninsula. Sailing north again through Neumayer Channel and Gerlache Strait, we arrive at the Melchior Islands with a very beautiful landscape with icebergs, where we may encounter Leopard Seals, Crabeater Seals and whales. Throughout this area offers excellent opportunities for kayaking and diving in the pristine Antarctic environment.

On our way north we are again followed by a great selection of seabirds while crossing the Drake Passage.

Day 12: The end of our voyage. We disembark in the morning in Ushuaia

We arrive in the morning in Ushuaia and disembark after breakfast.